If one were to head east, however, to countries like Japan, Taiwan, and China, they would find entirely different styles of eating, with chopsticks perhaps being the most popular. But why are chopsticks so prominent in the east and not in the west? This is partly because of their long history, and partly due to China’s influence on many of its neighbours.

The Origin Of The Chopstick

Chopsticks are believed to have been first invented around 4000 – 5000 years ago in ancient China, they were created to aid in cooking, as they were perfect for reaching down into cooking pots of oil and water without burning anything, and the earliest versions almost certainly were made of trigs. Historians have not been able to identify the date exactly that the Chinese people began to use chopsticks at their dining tables, but it’s believed that it started around 500 AD.

One of the reasons this occurred was due to large population growth in areas across the country, and it meant that many of the cooking resources they needed became increasingly scarce, forcing them to find ways to cook their food more efficiently, which involved cutting the ingredients up into smaller pieces.

These smaller morsels meant that knives at the table were no longer necessary, but they were perfect for picking up with chopsticks. Thus it became the standard way of eating in ancient China, and has survived for thousands of years to this day.

How It Began to Spread

It’s been a long held belief that any knives are not allowed on the tables, and while forks were sometimes seen, this was rare. A century or so after chopsticks became commonplace, they began to make their way to a series of other Asian counties. This included Korea, Vietnam, and eventually Japan. One of the biggest differences between Chinese and Japanese chopsticks is that the Japanese version is made from a single slab of bamboo that had been fused together at the base. On top of this, the Japanese had originally used their chopsticks in religious ceremonies and not for eating every day. Despite this, chopsticks were undoubtedly popular among these Asian countries, and it didn’t take long for the majority of people to adopt them as their primary method of eating every day today, and are used whether at the table or checking out the best sites around the web. 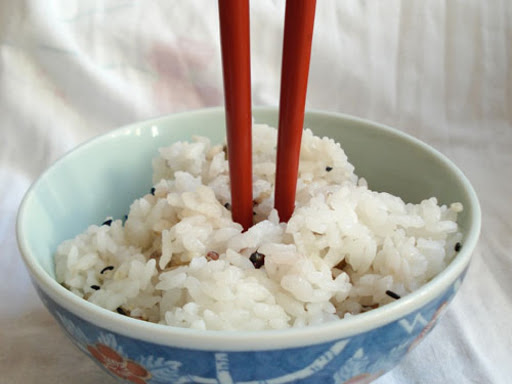 How Rice is Eaten

It might be a mystery to some as to how people within Asian countries are able to eat rice successfully with chopsticks instead of, say, a spoon. This is because the rice in most of Asia is either medium or long grain, and as such the rice tends to be much more gummy than the rices found in western countries. As such, it’s much easier to eat these kinds of rices with a pair of chopsticks.