Sushi has become so prevalent around the world that it can be hard to work out what is traditional and what has been created by the western world. In fact, many of the most popular sushi styles have come out of the USA and not the original home of Japan. Just look at the California Roll.

It’s reached the point that there are now restaurants in Japan that serve what they call US-style sushi bars. This is probably due to the world having such a mixed idea of what traditional sushi really is and often being disappointed or confused when they travel to Japan in search of sushi at its source. 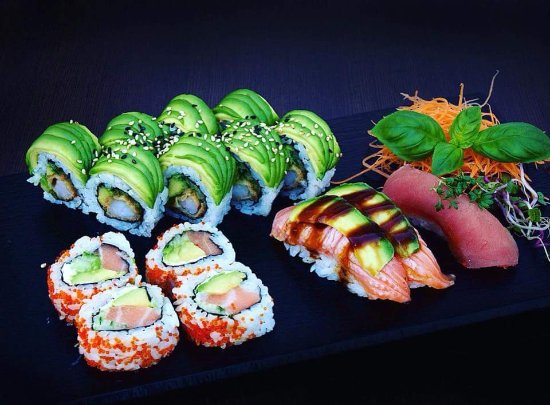 As disappointing as it is to talk about how many calories there are in our favorite food, it’s quite a big distinction to make. Traditional Japanese sushi generally has a much lower calorie count than anything created by the West. It’s also much simpler and more true to the nature of sushi – you get the fish and the rice, and maybe one or two more ingredients. It’s very rare that you get more than four ingredients in Japanese sushi. Classic examples are Nigiri, Kappa Maki and Natto Roll.

On the other hand, western versions of sushi are often a lot more complicated and include ingredients that are quite different. The Philadelphia Roll springs to mind, with its slice of cream cheese nestled in between the fish and rice. The sushi rolls created in the west also tend to include ingredients with a high fat count. The cream cheese, for instance, or tempura and mayonnaise. They may be delicious, but they do increase the calorie count by quite a bit.

In Japan, sushi has always been about what is available due to the seasons and the tides. When you go out to eat sushi in Japan, you wouldn’t expect to be handed a menu that includes the exact same options as a month ago, six months ago or three seasons ago. Instead, patrons sit at the bar and talk to the chef. He or she will then suggest things based on what they have got in from the markets or the fishermen. It’s an ever-evolving experience, much like AFL premiership betting is. This also means that while you get a lot of variety throughout the year, you don’t get a lot of variety at any one particular time. The menu for the day or the week is set based on what is available.

This is the complete opposite to the western idea of a sushi restaurant or bar. Even if you go and sit at a bar in an American-style restaurant, you expect to see the same standard menu available compared to the last 10 times you were there. Sure, there may be a few new specials, or some things taken off the menu to make room for a new idea, but the base menu will remain the same.