Trying to order what you want to eat in a sushi restaurant can be an intimidating experience. Even though the menu is written in English it’s a language all on its own!

A pickled white radish often served sliced into thin strips in a salad or as a garnish. It has a very mild flavour which means it suits most palates.

Soup stock made from seaweed and other ingredients. This broth becomes the base for a range of different soups and has a distinct umami flavour. 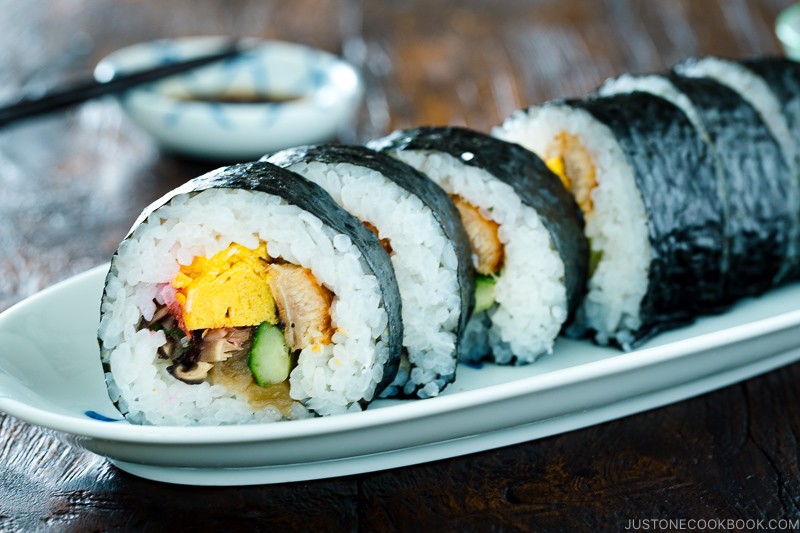 Large sushi rolls that are sometimes referred to as fat sushi rolls. Futomaki incorporates many different ingredients and is frequently served as a main dish or a focal point. These rolls are hugely popular in the USA.

This is sushi in the form of a roll, with sushi rice and different ingredients inside a sleeve of nori seaweed, rice paper, or even cucumber.

Slightly sweet wine used mostly in cooking to add a depth of flavour to marinades and sauces.

Sliced fresh fish atop a mound of vinegar-seasoned sushi rice. Sometimes a small dab of wasabi is placed between the fish and rice or a slender ribbon of nori seaweed may be wrapped around both.

Thin seaweed sheets dried and toasted to enhance the flavour. It’s a classic, dark-green seaweed that is often used to wrap sushi rolls and is as integral to a good sushi menu as a range of fun games to play online.

Light, crispy breadcrumbs. They’re unique, shaped more like flakes than crumbs, and have a unique texture. Panko is often used as a crunchy coating or topping in sushi rolls and more.

A tart, citrus-based sauce very common to Japanese cuisine, with a thin, watery consistency and a dark-brown colour.

Caviar, or fish eggs, often used to top or coat sushi rolls because of the texture and salty flavour they provide.

Rice wine which can be served hot or cold. Unlike regular wine, however, sake is distilled instead of aged.

Slices of fresh fish. While sashimi may well be served with a bowl of plain rice alongside it, it is not served in combination with this or any other ingredient.

Meaning egg in Japanese, Tamago is often served as a sweetened omelette sliced and set atop a mound of sushi rice.

Battered, or deep-fried. Many sushi restaurants in the United States serve tempura platters, shrimp, or vegetables instead of traditional sushi rolls.

Soybean curd with a very mild flavour. This means it’s often marinated because it’s so good at absorbing the flavours of the food around it, and it can be eaten fresh, fried, grilled, or sautéed. It’s a great source of protein for vegans and vegetarians.

A wide-leafed seaweed with a chewy texture, wakame is often made into a salad with chilli flakes, sesame oil, and sesame seeds.

A green paste made from Japanese horseradish and served along with many dishes to add a burst of heat and flavour.