Japanese sushi restaurants are of course renowned for their sushi, but raw fish isn’t the only thing on the menu at most of these places.

Such restaurants actually serve a wealth of different foods and snacks, including numerous local delicacies you likely haven’t tried before. Here are 10 of the weirdest and tastiest foods that you can expect to see on Japanese sushi conveyor belts!

The first thing you will notice about kaiten sushi restaurants in Japan is that each seat around the conveyor belt has its own built-in hot water tap that pours green tea at the push of a button.

A box of teabags or leaf tea is usually also available, allowing you to brew as many cups during your meal as you want. Of course, you are also welcome to drink your tea while you play Australian online pokies or socialise with friends.

Nigiri is sushi comprised of a moulded rice ball topped with a variety of different toppings.

The dish is usually topped with a succulent piece of fish, but offerings like vivid purple eggplant nigiri are also easy to find in Japan. 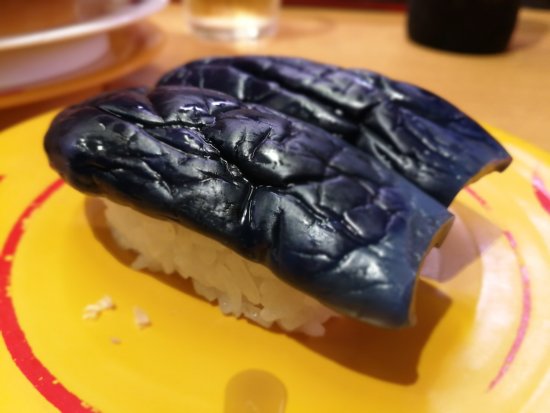 Strange nigiri in Japan don’t stop at pickled vegetables! They can also be topped with a selection of unusual meats like raw horse meat, horse mane fat, and other choices as well.

The dish is called ‘Sakura’, meaning cherry flower, because of its rosy pink and white appearance that reminds locals of the delicate flowers.

Natto is a fermented soybean paste that is usually eaten for breakfast in Japan. It is extremely healthy, but its strong odour and slimy texture can put some people off.

Regardless, many believe that it is delicious in sushi, either on its own or with other ingredients like quail eggs, vegetables and fish.

This type of sushi is a clear nod to American culture, and is made of a classic nigiri rice ball topped with a miniature cheeseburger patty.

The Genki Sushi chain is particularly well known for its hamburger nigiri.

Have you ever had sushi made with mayonnaise and golden corn? The Japanese use Kewpie mayo, a unique local product, to make their sushi as it is sweeter and creamier than traditional Western mayo.

These sushi rolls combine corn and mayo in a nori seaweed wrap, and can be found at many kaiten sushi joints across Asia.

Salmon and cream cheese – or even cheddar – is a popular sushi combination indeed.

The cheese is usually served melted over a traditional salmon or crab sushi roll, and is sometimes topped with exotic sauces to create interesting fusion cuisine.

Fugu is the Japanese name for the pufferfish, an extremely toxic fish that can only be eaten safely if it’s prepared by a trained professional.

Although it can kill, it is extremely popular at the 3,800 local restaurants at which it can legally be served in Japan.

Who says that sushi needs to be bite-sized? Some restaurants in Japan serve jumbo-sized sushi rolls with entire fish fillets topping them!

This is perfect as a whole meat, and although it is more expensive, it’s undeniably more delicious as well!

Kanpyo is a fascinating dish made from shavings of dried gourd that is cooked and fashioned into maki rolls.

Perfect for vegetarians, this dish makes a welcome change from classic fish or meat-based sushi variations, even though the filling closely resembles meat anyway.