Around 20 to 40 instances of fugu fish poisoning are reported every year in Japan. Symptoms include dizziness, exhaustion, headaches, nausea, breathing difficulties, and even death – and yet, the fish and its sushi are still considered a delicacy!

Fugu is the Japanese name for the most expensive, dangerous, and toxic fish in the world.

Australians may know it as globefish or blowfish, but no matter what you call it, the fish’s flesh is known as an exclusive dish among the Japanese. Although fugu is illegal in many parts of the world, there are nearly 4,000 fugu restaurants in Japan alone, with the trend catching on elsewhere on the planet too.

There are over 100 different variations of fugu, or pufferfish, to be found in the world, and they are all extremely poisonous. Their guts, eyes, kidneys, skin and livers are the most toxic components, so it is only recommended that the ‘torafugu’ is eaten to avoid poisoning.

Some aquatic farms promise that their fugu is poison-free, but either way, preparing this sushi dish takes a huge amount of skill and concentration from a chef.

Japanese chefs must train tirelessly for years in order to prepare it safely, and only then can they legally sell it at restaurants. Chefs must also be at least 20 years of age, and need to have trained for 4-6 years to be able to serve fugu sushi.

How Fugu Sushi is Served

Fugu is usually eaten in the form of raw sashimi, cut into thin pieces and displayed in the shape of a flower. It is generally served in winter to prevent enhanced toxicity that the fish produce as a reproductive defence mechanism.

Sometimes, other parts of the fish are eaten too, but it is here where things become a bit of a gamble, much like that you would find at your best pokies app!

The dish has been described by brave diners as delicate, gelatinous in texture, and very tasty. They also say that it does not have a fishy smell, even when served as sashimi.

It also has the most pronounced savoury ‘umami’ flavour of all fish, making it a prized meat in Japan and beyond. 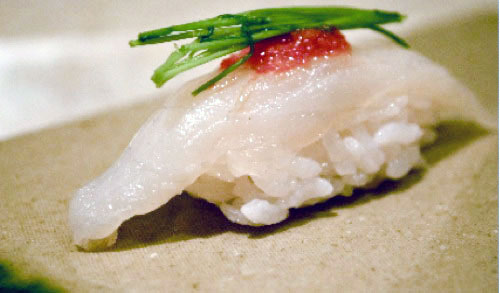 How Chefs Prepare the Hazardous Fish

The main purpose of preparing fugu is to properly remove all of its tetrodotoxin, which is found in all of its organs but not its bodily flesh. Tetrodoxin is extremely fast and painful, and causes mouth numbness, paralysis, and eventually death! It is considered to be 1,000 times stronger than cyanide, and there is no antidote for this particular poison.

With this in mind, fugu sushi should always be prepared by a professional and never at home. This is how pro chefs prepare the fish to make it safe for consumption:

Are you brave enough to try it?